A report from the conference held at Northumbria University on 3 September 2018 (part-funded by BARS). Call for papers and programme here.

‘Character to Caricature’ was an interdisciplinary conference held at the Institute for Humanities at Northumbria University on 3 September, 2018. Bringing together scholars from across the UK, the conference desired to build upon current understandings of character. More particularly, it sought to explore character’s wider narratological implications and transmedial qualities in the long eighteenth century. With ‘character’ open to a range of definitions – from that which is branded or stamped, to styles of writing, distinctive personalities, moral and mental qualities, and status or official rank – given our particular historical moment, the way in which we understand the credibility and believability of character seems due for a re-evaluation.

To begin to grapple with these questions, the conference opened with a session on ‘Performing Parodies’, before featuring sessions on ‘Situating the Satirical’ and ‘Curating Character’. First to present was Montana Davies-Shuck (University of Northumbria) whose paper addressed ‘Fops, Monkeys, and Caricature’. She discussed the ways English gentlemen ape French fashions, becoming foppish in their pretensions and mannerisms and paid particular attention to caricatures of Louis Bourbon as ‘Louis Baboon.’ Next was David Barrow (University of York), who explored the way King Alfred was appropriated in the eighteenth-century as a way to respond to negative perceptions of the house of Hanover. 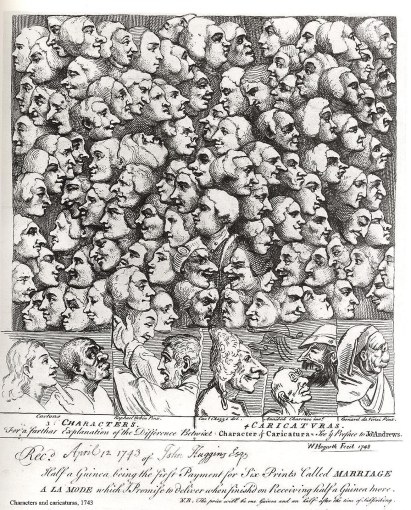 Refreshed after morning coffee, Adam James Smith (York St. John University) took us into the world of Tory satire, considering ‘The Partisan Hailing of “The Satirist” in the work of Joseph Addison and Alexander Pope’. Smith addressed the ways in which, for those in power, partisan hailing became a mode of simultaneously punching upwards and downwards. Continuing our exploration of periodicals, Mary Chadwick (University of Huddersfield) introduced us to the fascinating world of manuscript magazines. Focussing on the Breakfast Courant, she explored the use of animals in periodicals, paying particular attention to Welsh goats, Russian bears, and Addison and Steele’s lion. Olivia Ferguson (University of Edinburgh) delved into Walter Scott’s extensive collection of caricatures, considering the way in which only the author can genuinely illustrate their own work.

Following lunch, Ben Jackson (QMUL) opened with his paper ‘The Thrill of the Chaise: Gendering the Phaeton in Literary Satirical Culture, 1770-1820’. Jackson addressed the way in which carriage ownership revealed a man’s character with phaeton’s being the sign of the man ready to marry, while the possession of a carriage indicates that he has settled down. Fiona Milne (University of York) considered the way character was used in the courtroom in her paper on character defence and allegory in William Hone’s trials of 1817. Concluding the session, Hannah Moss (University of Sheffield) entered the world of visual and verbal caricatures of female artistic endeavour, challenging traditional (and also Austen’s) definition of the attributes that were required for a woman to be characterised as truly accomplished.

The keynote session was delivered by Dr Elaine McGirr (University of Bristol). Titled ‘Uniquely Typical; Typically Unique: a meditation on the paradox of character’, McGirr’s paper explored characters from Robinson Crusoe to Boris Johnson, considered the penchant for modern panel shows and the blurring of the boundary between politicians and celebrities. Her paper offered an opportunity for a wider reflection on the ways in which understanding the history of character and the ensuing cult of personality is a concern that is rooted in the eighteenth century but which inflects our culture today.

The event was an opportunity to engage with a range of new approaches to thinking about character in the long eighteenth century, and to build upon the influential studies by Deidre Lynch, Lisa Freeman, Jane Moody, and Julie Park. We are very grateful to BARS for supporting this conference, and for the financial assistance that enabled us to offer bursaries to postgraduate and ECR speakers.