Setting Goals in a Group

The start of a new semester is usually a good time for research groups to take a quick intellectual inventory of the previous months’ accomplishments and to plan ahead for future work. At our first BAND meeting of the spring semester last week, we spent a chunk of time talking about finishing up a new, big batch of letters for publication, as well as looking ahead to see what projects people might move to after the letters are done.

Obviously, from an organizational level, looking ahead is smart in order to prevent any lulls in productivity. But what about personal goals? Student research assistants contribute to ongoing projects, but how can projects contribute to students?

In order for student RA’s to get the most out their experiences, I think they should create [explicit, specific] personal goals that coincide with the larger activities of their respective projects. It’s a smart, simple way to ensure that learning is happening at the same time you’re grunting out the latest batch of proofreading. It will also help you clarify and talk about your experiences to colleagues and future employers.

For this spring semester, I’m working on …read more

Week 2 – "Metaphysics as Aesthetics: On Nietzsche’s Critique of Kant’s Teleology"

This week, we’re delighted to be welcoming Nicolas Lema from the University’s Faculty of Philosophy; he’ll be speaking to us about Nietzsche’s response to Kant’s notion of teleology:
Abstract
In 1868, Nietzsche planned to write a dissertation on Kant’s Critique of Judgment (1790) specifically focusing on Kant’s concept of teleology. Nietzsche, however, abandoned the project and left us with a set of notes entitled “On Teleology.” These complex series of notes reinterpret and radicalize some of Kant’s most cherished concepts used in the Third Critique to study both art and biology. Here I will focus on Nietzsche’s critique and radicalization of Kant’s notions of regulative principle and reflective judgment. For Kant, reflective principles of judgment guide our cognition about particulars in nature in the form of a subjective rule; not as an ontological claim about nature. For scientific purposes, however, a principle of natural teleology—a principle that claims things in nature happen for the sake of something—must be presupposed in order to guide research. This principle acts as a ‘regulative maxim’ that guides experience. I will argue that Nietzsche’s notes point to the essential ‘aesthetic’ content, not only of regulative principles, but also of the whole …read more

The final countdown: proofing the letters

Here at BAND, we’re deep into proofreading a batch of Blake’s letters that are currently being prepared for publication. The large amount of different objects (over thirty letters) means that everyone on the team has been involved in the process and so we have been recording any questions and discrepancies that we note on a shared Google doc. As I discussed in a post a few weeks ago, the term “proofreading” at BAND means a lot more that the word usually suggests, and this current project provides some good working examples of this part of the process.

Aside from the usual typos or queries about punctuation or tagging, we still encounter transcription questions at this late stage that we need to consider as a group. For example, Andrea noticed an instance where the word “of” actually seems to be composed of an overwritten ampersand that has had an “f” tacked onto it, letting the loop of the ampersand stand for the “o” in “of”. 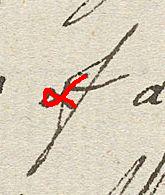 Hardeep also questioned the transcription of the letter “a” of “affectionately”, wondering if it is lower rather …read more

Robert Stagg, University of Southampton
Our speaker for this first Romantic Realignments of Hilary Term proper is Robert Stagg, who will respond to the characterisation of Wordsworth as ‘a writer of “good Bad Verse” (Wyndham Lewis)’ with a paper that aims to ‘defend Wordsworth’s bathos’:
This defence cleaves into two categories, even as those two categories ultimately cleave to each other – noticing 1) the ability of bathos to clear false wonder from verse, mocking and twitting it, before revealing a true wonder; and 2) the way in which bathos can hold a latent energy of wonder, so that Wordsworth can extract a “hyperclimax” (in Coleridge’s terminology) from an anti-climax. My paper will begin by considering the nature of bathos, with brief examples from Pope, Byron, Clough and others before turning to the specifically Wordsworthian bathos outlined in points 1) and 2) above. I will examine Wordsworth’s paratextual writings about bathos, in the ‘Preface’ to the Lyrical Ballads and the notes to some of the poems, while turning to the poems themselves. I will consider some of Wordsworth’s late poetry and the Alps episode in Book 6 of The Preludeas examples of bathos 1) before turning to ‘Simon Lee’ as an example …read more

Five Questions: Tim Fulford on the Late Poetry of the Lake Poets

Tim Fulford, Professor of English at De Montfort University, is one of the hardest-working scholars in Romantic studies. In the past several years, he has, among other things, edited (with Lynda Pratt) Robert Southey’s Later Poetical Works and large parts of his voluminous Collected Letters; produced editions of Robert Bloomfield’s letters and his poem The Banks of the Wye; and organised a series of excellent conferences. Below, we discuss his fascinating new monograph, The Late Poetry of the Lake Poets: Romanticism Revisited, which was published by Cambridge University Press last month.

1) In his last book, On Late Style, Edward Said looks at lateness not as ‘harmony and resolution’ but as ‘intransigence, difficulty, and unresolved contradiction’ involving ‘above all, a sort of deliberately unproductive productiveness, going against…’. Was a ‘contradictory, alienated relationship’ with ‘the established social order’ something you found manifested in the late works of the Lakers, or were their late styles more conciliatory?

None of the above …read more

Global Romanticism: Thoughts on the “Field”

By manuchander by Manu Samriti Chander When I started graduate school in the early 2000s, I planned to focus on postcolonial literatures, especially poetry, which at the time was relatively under-examined. Part of the reason for this general lack of attention, I suspected, was that the postcolonial novel gave us permission to emphasize cultural studies over […] …read more

I can’t say that I’m a regular reader of the Chelmsford Weekly News, but earlier this month I found my Facebook and Twitter feeds filled with links to an article in this publication concerning a very exciting discovery for Mary Shelley fans. While searching the archives at the Essex Records Office for information about an obscure nineteenth-century novelist known as Miss Crumpe, Professor Nora Crook (Anglia Ruskin) serendipitously came across a record for thirteen unpublished letters from Mary Shelley to Horace Smith and his daughter Eliza. Written between 1831 and 1849, the letters promise a fascinating glimpse into this period in Shelley’s life.

These documents, Professor Crook explains, offer us an insight into Shelley’s friendship with the Smiths, revealing her loyalty to the family alongside personal details about her son and her failing health. Shelley consults with Smith about one of Edward Trelawny’s manuscripts, and asks if she can have permission to publish some letters written by her late husband, Percy Shelley, in which he expresses negative views about religion.

The letters will be published in a future edition of the Keats-Shelley Journal.

The original article from the Chelmsford Weekly News can be found here.

By maximiliaan@gmail.com by Maximiliaan van Woudenberg Happy New Year Everyone! My introductory blog ‘last year’ – actually only a few weeks ago – provided a brief overview of Fantasmagoriana (1812) the text that inspired the famous ghost-storytelling contest at the Villa Diodati. This text was a French translation of the first two volumes of the five-volume German Gespensterbuch (1810–15). […] …read more

As one of the two undergraduate assistants to the Blake Archive at the University of Rochester (BAND), my main activities are:

As I’ve suggested, the Proofreading Form is one of my closest companions at the Blake Archive. …read more

Sandy White, at the University of Southampton, sends details of a bicentenary symposium on Mansfield Park, which will be hosted by Gillian Dow at Chawton House Library on Saturday 8th March and which features a number of excellent speakers:

Katie Halsey, (University of Stirling),
‘Mansfield Park: Then and Now’

Anthony Mandal, (Cardiff University)
‘1814: A Bad Year for the Novel’?

For more information and to register, please visit:
http://www.eventbrite.co.uk/e/mansfield-park-at-chawton-house-registration-8970181053