Orianne Smith, the inaugural winner of the BARS First Book Prize, is an Associate Professor and Chair of the Department of English at the University of Maryland, Baltimore County (UMBC). She has published widely on topics including gender in the Romantic period, the Gothic, Romantic war poetry and the connections between religion, superstition and magic in the eighteenth and nineteenth centuries. She edited Hubert de Sevrac (1796) for the Works of Mary Robinson (2009-10) and she is currently working on an edition of Helen Maria Williams’ Julia, a novel (1790) for Broadview. Her award-winning first monograph, Romantic Women Writers, Revolution, and Prophecy: Rebellious Daughters, 1786–1826, which we discuss below, was published by Cambridge University Press in 2013.

1) How did you first come to realise that you wanted to write about the relationship between revolution and prophecy in the works of British women writers of the Romantic period?

It was a happy accident. During my second year in graduate school I was taking a course on seventeenth-century sectarian writers and wrote my final paper on the wild, wacky and truly wonderful Civil War prophetesses. Like most students I was still working on the paper …read more

I enjoyed three fantastic days at ‘BARS 2015: Romantic Imprints’, which was organised by Dr Anthony Mandal and Dr Jane Moore of Cardiff University. A convivial and inspiring atmosphere, a great location and even the Welsh weather on good form all made this really entertaining and stimulating conference experience. In this blog I’d like to document some of the highlights I experienced from the panels and plenary talks across the Thursday, Friday and Saturday. I only wish I could have had time to go to more! The full programme is online here.

On the Thursday I attended the panel ‘Philosophical Imprints: Experimentation and Empiricism’. Tim Milnes gave a paper on ‘Socialized Epistemology and the Essay’, considering Hume, Lamb and ‘socialised empiricism’. He considered how intersubjectivity emerged as a counterpart to scientific empiricism, and how Hume unpacks the idea of the polite culture of the essayist in his ‘Of Essay-Writing’. Mary Fairclough followed with a paper on ‘Electricity, Experiment and Faith in the 1790s’: this was fascinating, especially as I knew nothing about the history of electricity beyond the very basic facts. She discussed Adam Walker’s A System of Familiar Philosophy, and the prevalence of …read more

(We’re very glad to welcome Lucy Johnson, of the University of Chester, to the BARS Blog, with a first post taking an in-depth look at two of the panels from Romantic Imprints – Ed.).

The 2015 British Association for Romantic Studies International Conference was held in Cardiff this July. Entitled Romantic Imprints, the conference boasted an extraordinary array of interdisciplinary and wide-ranging scholarship on various facets of Romanticism, and delegates were greeted with a feast of ideas from which to choose. I was lucky enough to attend a number of incredibly interesting and thought-provoking panels, and it is space alone that requires me to limit this report to two panels in particular.

The 1:45 PM Thursday panel I attended was Apocalypse and Ruination, chaired by Diane Piccitto (Mount Saint Vincent University). This panel took a fascinating and diverse approach to the inspirational pull of apocalyptic imagery on the Romantic imagination, spanning from the real-life destruction of Herculaneum and Pompeii to a wide-ranging set of analyses of the depiction of millennium in Mary Shelley’s The Last Man.

The first paper was given by Sophie Thomas (Ryerson University, Canada) and was entitled ‘Pompeii, Herculaneum, and the Imprint of the Ancient World’. …read more

Over on the Lady’s Magazine Project Blog, there have been two interesting posts on panels at Romantic Imprints, one by Koenraad Claes on the value of the Lady’s Magazine for Romanticists, and one by Jennie Batchelor on the excellent Minerva Press panel.

‘Rising Universe’, or, the Shelley Fountain 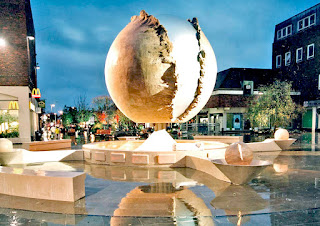