Searching for ‘R’: A Collaborative Identification

One of the questions we are often asked about the Lady’s Magazine (1770-1832) is regarding the identities of the magazine’s thousands of anonymous and pseudonymous writers who were often longtime contributors. Koenraad, Jennie and I have all written about some of the methodologies we use, problems we encounter and attributions we have made in various blog posts regarding the identity of these elusive authors. While my role on the project is focused on the examination and analysis of content, I often become intrigued (some might say obsessed) with the question of the individual behind the mask. In such instances, our team’s collaborative efforts are at once essential and particularly fruitful.

‘R’, a prolific contributor of tales and translations, was a particularly intriguing puzzle in terms of identification for a number of reasons. First, the number of contributions by ‘R’ was enormous and varied and the simple letter ‘R’ could be used by any number of different contributors. Additionally, ‘R’ was signed variously ‘R’, ‘R.’ and ‘R—’, making it difficult to pin down which contributions were from the individual we sought and …read more

On This Day in 1816: Italy, Romanticism, and the Year Without a Summer (Part I)

We continue the ‘On This Day’ series with a post on Italian Romanticism from Fabio Camilletti, who is Associate Professor at the School of Modern Languages and Cultures, University of Warwick. This post has two parts; the second will be posted here next week.

As always, to contribute a blog to this series about the bicentenary of a significant event in 1816, please contact Anna Mercer.

‘Maladett Bonaparte!’ – ‘Damn Bonaparte!’: thus ladies exclaimed around 1816 (at least, according to Stendhal’s testimony), when approaching Porta Orientale, the ancient door of Milan – nowadays Porta Venezia – from whence the Alps could be seen at the end of the Corso, where aristocrats’ carriages used to parade.

For them, Stendhal records, the French Emperor was the cause of the early frosts experienced in Lombardy since the French Revolution: in opening the route of the Simplon, Napoleon must have breached the natural wall of the Alps, which had thus far sheltered the city from the inclemency of Northern winds.

Together with the frost, Bonaparte had also brought something else. Many years later, in The Charterhouse …read more

Researching visual, print and material culture in the UK?

Librarians and archivists around Edinburgh, Dublin, Manchester, Leeds, Cardiff and South Wales, and Liverpool (coming in October 2016) have put together guidebooks that take researchers to treasures such as letters between Cruickshank and his publishers, centuries-old sketches featuring Kirskstall Abby, and photos of the Cottingley Fairies. There are botanical illustrations so realistic you feel compelled to stroke petals and illuminated maps, manuscripts and charters with the paintings of Queen Elizabeth I, whose elaborate signature officially classifies as a work of art itself. Many of these gems are not online.

“These are handy, well designed little booklets,” says art historian, Mark Westgarth, “loosely drawing on the format of the ubiquitous city tourist guides. They are portable, user friendly and fit in a coat pocket.”

“All these cities have fantastic collections on architecture, design and history broadly defined, but researchers don’t know how to get their hands on everything they might need — this guide helps solve that problem,” says Rose Roberto, book historian at the University of Reading and series editor.

Introductions to each guide have been written by leading scholars such as Christine Casey and Ben Read. Through a visual narrative, all guides point the way to libraries …read more

The William Blake Archive is pleased to announce the publication of an electronic edition of the Genesis manuscript from the Huntington Library, Art Collections, and Botanical Gardens.

In the last year of his life, Blake began an illuminated manuscript of the biblical Book of Genesis for his patron, John Linnell. Of its eleven large leaves, probably cut from Whatman Imperial-sized wove paper, the first two are title pages. The text on leaves 3-11 closely follows chapters 1-4 of the King James Bible, decorated with sketched headpieces, tailpieces, and interlinear designs, with chapter headings of Blake’s own invention that align the biblical creation narrative with his myth of creation, division, and forgiveness. His insertion of “adamah” after most appearances of “ground” in the English text shows Blake’s (and his patron’s) engagement with the original Hebrew, underscores Blake’s view that the creation of the first man was a descent into materiality, and suggests that Adam was originally androgynous because “adamah” is a feminine noun.

Like the title pages of a number of Blake’s early illuminated books, his lettering of the Genesis titles is closely integrated with the illustrations. The reason for variant title pages is not clear, though perhaps Linnell responded unfavorably …read more

A Woman Washed Away

The following is a note I left to future scholars and editors exploring copy F of Blake’s Songs of Innocence:

“The woman who, in copy B, sits behind the table, second from the left, is nearly absent in copy F. A shape that may be her right shoulder appears in F, as well as in S-IE C and S-IE R. She is absent from S-Inn L and Z.”

It’s a rationale for altering the notes (or “markup”) associated with each of copy F’s plates. In this instance, copy B is my template for creating copy F’s notes. This is my current work in the Archive: I compare a newly digitized copy of a Blake work with an older counterpart, note the differences, and adjust the records accordingly. If you’ve ever read Highlights magazine, you know exactly what I’m talking about (just swap Blake’s illustrations for forest animals). Usually, the tweaks are minor: an extra tiny animal here, a different border pattern there. The most ubiquitous change is probably the addition of “a rosy wash in the sky indicating sunrise or sunset.” Blake loved sunrises or sunsets.

But sometimes the change is bigger, as in the example from my notes above. The major illustration …read more

Just a few days left to submit abstracts for ‘Placing Charlotte Smith’…
—
CALL FOR PAPERS
Placing Charlotte Smith—Canon, Genre, History, Nation, Globe
Chawton House Library, Chawton, UK
14-15 October 2016
Two hundred and ten years after Charlotte Smith’s death and nearly a decade after the publication of The Works of Charlotte Smith, Smith scholarship is coming of age. The conference Placing Charlotte Smith will convene at the beautiful Chawton House Library to explore the latest research on Smith and her places. What are we learning about her place in the canon, or in the development of various genres? What sort of commentary does her placement of characters in history offer? What attitudes do her works demonstrate about place and the idea of a polis/nation? Where are the places Smith is or might be memorialized? What are the various meanings of the natural places she explores in her fiction, poetry, journalism, and children’s literature? Is there now such a thing as a global Smith?

In addition to panel presentations and discussions, the conference will feature performances of musical settings of Smith’s Elegiac Sonnets and of Beachy …read more

REPORT: Valentines CRECS: How romantic were the romantics? (8 February 2016)

By sophiecoulombeau In the week of Valentine’s Day, the CRECS audience assembled to hear husband-and-wife team Professor John Strachan (Romantic scholar and Pro-Vice Chancellor for Research at Bath Spa University) and Dr Jane Moore (Reader in Romanticism at Cardiff University) address some burning questions about romance in the Romantic era. What can literary men and women of the period […] …read more

Please see below for a Call for Papers for ‘Works in Progress’, the second annual Graduate Conference for Adaptation and Textual Studies, which will take place at De Montfort University in Leicester on Thursday 7th July.

All texts and artworks will have at one stage been a work in progress, despite the tendency to value them as cultural artefacts once they are deemed finished and made available for consumption. Redrafting and editing are processes which strive towards a “final” product, meaning their publication often results in the loss or occlusion of multiple ancillary versions. Such materials are important to our understanding of how texts and works are shaped and reshaped, and by whom.

The second annual Graduate Conference for Adaptation and Textual Studies (GradCATS) aims to explore the significance of alterations and decisions made during the construction, editing or reproduction of all kinds of creative works, including manuscripts, printed books, films, television programmes, music, photographs, dances, and paintings. We are open to a consideration of “works in progress” on a broad scale, from planning documents, drafts, cut or unfinished materials, through to republications, reproductions and adaptations. Proposals for 15-20 minute papers and panel sessions are …read more

Jane Austen, the Lady’s Magazine and what if Mr Knightley didn’t marry Emma? 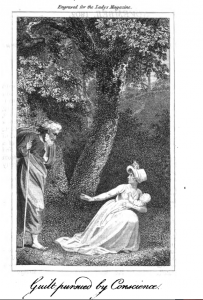 Regular readers of this blog will know that the Lady’s Magazine project is currently running ‘The Great Lady’s Magazine Stitch Off’. We have made available 8 of the magazine’s embroidery patterns, which are being recreated, as I type, by dozens of people around the world. Many of the results will soon be on display in a major new exhibition, ‘Emma at 200: From English Village to Global Appeal’, which opens at Chawton House Library next month, to celebrate the 200th anniversary of the publication of arguably Austen’s best-crafted novel.

The fact that the Lady’s Magazine has found its way into the exhibition – in a room that will be devoted to the arts of music, needlework and painting – is absolutely fitting. The magazine fed, while also being critical of, the appetite to cultivate female accomplishments in the period. It printed song sheets for much of its run as well as monthly embroidery patterns. The magazine also encouraged word play, and the kind of games that generate so much misunderstanding in Emma owe more than a small debt to the enigmas published in the Lady’s Magazine and other rival publications.

The magazine also featured and was widely read …read more