Acrostic Poems, Love and Life in the Lady’s Magazine 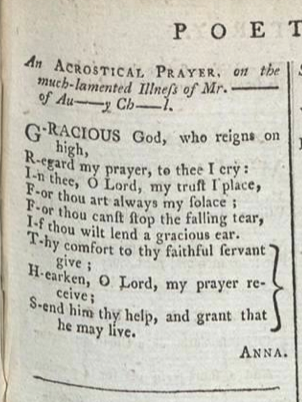 One of the fascinating, yet easily overlooked, genres of the Lady’s Magazine is that of the acrostic (or, as they are often termed, ‘acrostick’) poem. Readily dismissed as amateurish attempts at poetry, the acrostic holds a special place in my heart. The acrostic offers much potentially valuable information about contributors’ names, locations, and names of their beloved/friends/family. The form also depends more on writers’ — and readers’ — ingenuity than it usually receives credit for.

The acrostic poems in the magazine were exploited by the contributors in deliberately revealing ways. Their use is often not merely an attempt to highlight the contributor’s cleverness, but a means of interacting with members of a local geographical community – most often (and this is why I love them) with the object of the writer’s affection. Contributors could give voice to questions, desires, apologies and declarations to those closest to them in their personal lives through the pages of the magazine. The medium of the periodical provided a veil that allowed, in particular, women to voice their desire to men without the danger of being directly observed by a social circle and consequently condemned for forward or coquettish behavior.

Within the pages of the poetry section, …read more

By Anthony Mandal Popular Romanticism (http://poprom.streetprint.org/) is an open access online resource for the study of print and reading in the Romantic period. The following questions are of central importance: What did people read? How did people read? How did such things change over time? How can this be described? The archive includes bibliographic description and select images […] …read more

By Anthony Mandal The Cardiff Romanticism and Eighteenth Century Seminar (CRECS) turns three semesters old on Tuesday, 17 May 2016 … And, to celebrate, it’s time for the first CRECS Annual Conference! CRECS exists to support and stimulate interest and discussion in Romantic and 18th-century studies at Cardiff University. With that in mind, we will be holding a unique daylong event […] …read more

Postgraduates and early career scholars working in the area of Romanticism are invited to apply for a Stephen Copley Research Award. The BARS Executive Committee has established the bursaries in order to help fund expenses incurred through travel to libraries and archives, up to a maximum of £300. A postgraduate must be enrolled on a doctoral programme in the UK; an early career scholar is defined as someone who holds a PhD (from the UK) but has not held a permanent academic post for more than three years by the application deadline. Application for the awards is competitive, and cannot be made retrospectively.

Successful applicants must be members of BARS before taking up the award (to join, please see this page). The names of recipients will be announced on the BARS website and social media, and successful applicants will be asked to submit a short report to the BARS Executive Committee within four weeks of the completion of the research trip and to acknowledge BARS in their doctoral thesis and/or any publication. Previous winners or applicants are encouraged to apply again.

By katie.garner@live.co.uk Humanities scholars who are persistently reminded about the necessity of making their research interdisciplinary should definitely turn to Maureen McCue’s British Romanticism and the Reception of Italian Old Master Art, 1793-1840 for an object lesson on how to combine disciplines not simply for the sake of ‘interdisciplinarity’ as a catch-all idea, but rather in order […] …read more

By katie.garner@live.co.uk Humanities scholars who are persistently reminded about the necessity of making their research interdisciplinary should definitely turn to Maureen McCue’s British Romanticism and the Reception of Italian Old Master Art, 1793-1840 for an object lesson on how to combine disciplines not simply for the sake of ‘interdisciplinarity’ as a catch-all idea, but rather in order […] …read more

Stitch Off participant Lucie Whitmore on embroidering for research 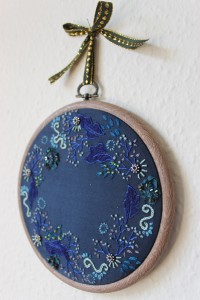 Sometimes there are benefits to spending far too much time on Twitter, and I was so excited when earlier this year I saw tweets about the Lady’s Magazine Stitch-Off pop up on my feed. In this short blog post I will describe my Stitch-Off experience, working with embroidery patterns from a 1796 edition of the Lady’s Magazine.

I am currently working on a PhD related to academic dress history , but my first degree was in textile design with embroidery. I have created small embroidered pieces intermittently over the past few years, though often struggling to find the time or motivation without a set project. The Stitch-Off, so perfectly linking research with the opportunity to try out some historical patterns for myself, was the ideal project to get me sewing again. When Jennie told me about the Chawton House / Jane Austen connection, the incentive was even greater!

I have had a go at three of the Lady’s Magazine patterns. I decided to think of them as trials, using different materials and stitches to see what worked best. My pieces will not be the most polished or accomplished in the exhibition, but I …read more

As we continue work on the redesign of the Archive, our collaborative efforts with programmers and web designers who are unfamiliar with Blake’s work reveal aspects of the Archive’s structure and organization that we take for granted. Our bi-weekly meetings often involve volleys of patient explication: the Blake folks (Joe Viscomi, Ashley Reed, Mike Fox, and myself) offer mini lessons on Blake’s multimedia production in order that the designers and programmers better understand the content they’re working with; and they in turn lecture us on the possibilities and constraints involved with the database structures, modified programming languages, etc. that will display that content.

One recent sticking point has been the concept of virtual groups. Virtual groups designate objects that Blake himself never conceived of, produced, or bound as a unified work in the way that he grouped, say, the eighteen plates of America as a single work. Examples of virtual groups include the Large Color Printed Drawings, the Pen and Ink Drawings, the water color and painted Illustrations to the Bible, and Blake’s letters. These groups are titled—and their constituent objects chosen—not by Blake, but by the editors of the Archive, and thus they are a blatant example of the editorial …read more

Shoe Conversations; or, what the Lady’s Magazine Stitch Off taught me about eighteenth-century footwear, embroidery, and community. 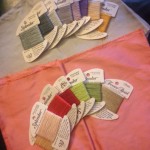