In 2014 the William Blake Archive added a new wing devoted to searchable HTML and PDF editions of back issues of Blake/An Illustrated Quarterly, beginning with issues from the years 2000-2009. In 2015 we added the forty issues from 1990 to 2000 and five issues published since 2010. Earlier this year we announced the publication of the quarterly’s forty issues from 1980 to 1990. Today we are pleased to publish the first two volumes and three issues of the third volume, 1967-69, of what began as the Blake Newsletter—$2 for four issues.

The upcoming volume year of Blake/An Illustrated Quarterly is its fiftieth—perhaps perversely inevitable given Morton Paley’s words in the first issue of 15 June 1967: “I think the Newsletter should be just that—not an incipient journal.” That issue, a nine-page mimeographed publication of the Department of English at Berkeley, included a report on the rediscovery of the Small Blake-Varley Sketchbook and solicited opinions on the dating of the two Nights the Seventh in The Four Zoas.

Paley has been an editor from the start. Morris Eaves joined him in 1970, when the newsletter moved its printing and publishing business to the University of New Mexico. Mimeograph became photolithographic …read more

Many thanks to Erin Farley for writing the report below on the ‘Gender Stereotypes in the Long 19th Century’ symposium held at Stirling in April. BARS provided a subvention to help support this event.

On Saturday 30th April 2016, the University of Stirling hosted a one-day symposium, organised by Barbara Leonardi, on ‘Gender Stereotypes in the Long 19th Century.’ The symposium aimed to examine the effects of gender stereotypes and of challenges to them as the Romantic period shifted into the Victorian, as well as considering identify threads leading into 20th century culture. Furthermore, it explored the intersections between gender, class and race over the period in question– an approach which more than one delegate remarked was still disconcertingly rare in studies of this period.

Holly Furneaux’s engaging opening keynote “Kind-hearted Gunmen? An emotional history of the Victorian military Man of Feeling” examined the ways in which military violence was written out of accounts of war, replaced by the image of the soldier as a kind, loving figure, seen in novels such as Vanity Fair – the ‘domesticated English lion’. Furneaux also identified the legacy of this imagery in contemporary culture – for example, the popularity of ‘Returning Soldier’ videos …read more

Prize-winning animation of Blake’s ‘The Tyger’ by Y12 student

Radheya Jegatheva, a Year 12 student at Perth Modern School, Australia, has created a prize-winning animation of William Blake’s ‘The Tyger’:

Narration is by Jay Jay Jegathesan.

It’s a beautiful short film (great for introducing students to Blake) which has just won the following awards:

Becoming Jane: The Case of a Lady’s Magazine Emigrant 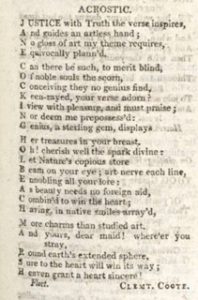 Working on The Lady’s Magazine project this May and June has led me down all manner of bizarre eighteenth-century rabbit holes, and no two days are ever the same. I have, over the month, chased one of Mary Robinson’s stray Sylphids across numerous newspapers. I found myself reading about sheep rot in an agricultural magazine just yesterday. I encountered a very serious vicar (J. H. Prince) who, as well as reflections on suicide, also wrote odes on dead cats (there are a surprising number of these, from a surprising number of contributors, in the magazine). I caught a brief glimpse of Emma Hamilton, or someone posing as her, in the pages of 1800, waxing lyrical about reading Dimond’s petrarchal sonnets. I smiled as the same hopeless swain, writing hopeless lines of poetry, tried with his lays first to ensnare one Susan Yates, and then just two months later, a Sophia. I laughed at Dr Hawes’ recommended methods for restoring to life the apparently dead (‘what thou doest – do quickly’), and laughed even more as ‘Tommy Softchin’ bemoaned his lack of whiskers. Sometimes I got very carried away on Ancestry; I tracked down the son of one of the …read more

The final programme for Romantic Voices, which begins tomorrow in Oxford, is now available via the conference page. Look forward to seeing many of you there.

Having started and run this blog for two years, I’m moving to pastures new(ish): I have been appointed a permanent lecturer in the English & Creative Writing Department here at Roehampton from September 1st, and so the position of RIN Postdoc and Network Facilitator is now being advertised for someone else to take on.

Thank you for following the blog, for your comments and likes, for your emails and suggestions, for attending RIN events, for giving papers, for writing chapters for ‘Romantic Illustration’ (edited collection, forthcoming) and for generally being a lively and supportive intellectual community. Long may this continue.

I’ll still be part of RIN, but I will be passing the torch of organising and facilitating to someone new in September. The job advert is here, with a deadline of July 11.

By danielcook by Daniel Cook with Lucy Hodgetts As part of this ongoing series on Teaching Romanticism we will consider the ways in which we lecture on and discuss individual authors, whether during author-specific modules or broader period surveys. I thought it would be particularly useful to hear about which texts educators use and in what context, […] …read more

It is with great sadness that we announce the passing of Diane Long Hoeveler, Professor Emerita at Marquette University, Milwaukee, who died on May the 14th. Diane was a widely respected scholar and known to many of us as the editor of European Romantic Review. Her last book The Gothic Ideology: Religious Hysteria and Anti-Catholicism in Popular British Fiction, 1780-1880 (University of Wales Press, 2014) was shortlisted for the Allan Lloyd Smith prize, a prize she won in 2011 for Gothic Riffs: Secularizing the Uncanny in the European Imaginary, 1780-1820 (2010). Other books included The Professionalization of Gender from Charlotte Smith to the Brontës (1998) and Romantic Androgyny: The Women Within (1990). Diane was a regular delegate at BARS conferences and she will be much missed.

– Ian Haywood, for the BARS Executive

Proposals of c.300 words accompanied by a short CV are invited for 20-minute papers related to the material and visual culture of commemoration in Ireland from c.1800 to the present day. Please email to makingmemory@ncad.ie.

This cross-disciplinary conference will address how objects, images, artworks, buildings, spaces and bodies have worked and been understood in the creation and maintenance of public and private memory in Ireland since c.1800. While topics might include key personages and events such as World War 1, the Irish Civil War and the Manchester Martyrs, we also encourage proposals that address the commemoration of lesser-known histories.

Commemorative culture might encompass events such as ceremonies and parades, artefacts such as souvenirs or artworks, institutional practices such as collecting and exhibiting, particular sites such as commemorative buildings, graveyards and ceremonial spaces, and private modes of visual and material remembrance such as domestic mnemonic objects.

The conference should contribute to our understanding of how ideas about the past have been visualised, manufactured, articulated, materialised, …read more 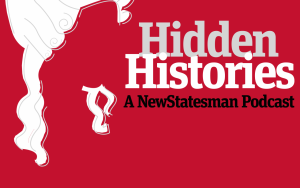 We’ve been very busy in the last few weeks. And as the Lady’s Magazine project races towards completion in September 2016, I have been feeling more than a pang of guilt about not being as present on our social media as I would like to be. In part, that’s because we have all been quite busy outside the world of the Twittersphere, with conferences, workshops and, also, other forms of writing beyond the blog.

We’ve been finding it hard to keep up with all the different things that we’ve been doing, and it occurred to me earlier this week that it likely means you have, too. So, just in case you have missed anything that may be of interest to you, we thought we would list some of this activity in one place to make it easier to find. So here’s just some of the things we’ve been up to.

A couple of months ago, I was invited by Dr Sophie Coulombeau (Cardiff University) and Dr Liz Edwards (University of Wales) to take part in 3 of a series of 6 podcasts on eighteenth-century women writers and and how both got written out of literary history for …read more