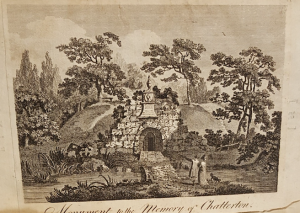 As many of you know, the Lady’s Magazine project began as an effort to provide an annotated index of all of the text content of the Lady’s Magazinefrom 1770 to 1818. In addition to cataloguing every one of the around 15000 anecdotes, essays, serials and so on that the periodical printed during those years, we classified each of these items generically and provided keywords for every separate item in it to make its thousands of pages more easily navigable for modern readers and researchers.

We also worked to identify source texts for the magazine’s reprinted and excerpted material (no mean feat since periodical editors in this era were usually coy, shall we say, about such matters) and attempted to identify as many as we could of the magazine’s anonymous and pseudonymous contributors.

We posted a number of our findings along the way on this blog, identifying the likes of the truly fascinating translator R. while also illuminating the careers of poets such as John Webb and fiction writers such as the Yeames sisters.

The indexing part of the project ended in 2016. But for me, this work is far from over. In recent months, I have given a paper …read more

By The Keats Letters Project The second letter from Keats’s tour, sent back to Liverpool hoping it would reach George and Georgiana before their departure to America. …read more

Keats Lives in the Eye

Applications are now open for a Visiting Fellowship at Lancaster University with Nineteenth-Century Matters.

Nineteenth-Century Matters is an initiative jointly run by the British Association for Romantic Studies and the British Association for Victorian Studies. Now in its third year, it is aimed at postdoctoral researchers who have completed their PhD, but are not currently employed in a full-time academic post. Nineteenth-Century Matters offers unaffiliated early career researchers a platform from which to organise professionalization workshops and research seminars on a theme related to nineteenth-century studies, and relevant to the host institution’s specialisms. The focus should be on the nineteenth century, rather than on Romanticism or Victorianism.

For the coming academic year Nineteenth-Century Matters will provide the successful applicant with affiliation in the form of a Visiting Fellowship at Lancaster University. The fellowship will run from 1 September 2018-August 31 2019. The successful fellow will particularly benefit from and contribute towards the University’s expertise in digital and environmental humanities. They will also be encouraged to actively contribute to events being planned by the Research Centre for Culture, Landscape and Environment.

This fellowship includes a Lancaster University e-mail address, and access to its library and electronic resources for the full academic year. There …read more

By The Keats Letters Project The first letter from Keats’s Northern Tour–courtesy of James Freeman Clarke’s publication of it in 1836. …read more

A report from a research trip funded by a BARS Stephen Copley Research Award.

The BARS Stephen Copley Research Award afforded me the opportunity to visit Chawton House Library in Hampshire, which holds a large collection of women’s literature, predominantly from 1600-1830, including books belonging to the Knight family and borrowed by Jane Austen.

I was able to spend a fortnight in May 2018 studying conduct novels ranging from 1814, the year of Mansfield Park‘s publication, to 1830, when Elizabeth Gaskell became a teenager. The research I undertook will inform the foundation of my PhD thesis in which I will track the tropes and transformation of the conduct novel, from conduct manuals such as Hannah More’s Strictures on the Modern System of Female Education, to the established conduct novels of Frances Burney and Maria Edgeworth. I will consider the collective effect these novels had on women’s writing, and on public opinion regarding what it was appropriate for women to write about.

Though a number of critics have vied to align Austen with contemporaneous conservative and radical novelists alike, there is a distinct …read more

By The Keats Letters Project The only extant letter from Keats to Thomas Monkhouse, a cousin of Wordsworth’s wife (and one of the attendees at the immortal dinner). …read more

By The Keats Letters Project A list of requests for Taylor as Keats gets ready to depart on his summer adventure. …read more

A detailed report from the BARS-sponsored conference that took place last month. Visit our website to find out how to apply for BARS conference support.

The first day started off with a panel entitled ‘The Romantic University and Romantic Poetry,’ where Matthew Sanger’s opening paper discussed a number of Romantic poets’ diverging takes on the university experience in their verse, highlighting the conflicting views of higher education at the time. Catherine Ross gave us the institutional perspective in the paper that followed, detailing the organisation of academic curricula in Oxford and Cambridge in the period, along with how students would typically spend their time outside of class, arguing for the importance …read more 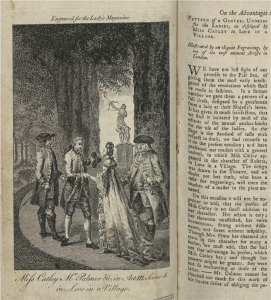 Many of the Lady’s Magazine project’s followers do so because they are interested in fashion. That’s hardly surprising, really. The periodical’s fashion plates, reports, embroidery patterns and the many hundreds of essays it published on the allure and perils of sartorial consumption are the very things that first brought me to the Lady’s Magazine as a PhD student writing on eighteenth-century dress back in the late 1990s.

From its very first issue in August 1770 signalled that regular ‘fashion intelligence’ in the form of engravings and written descriptions of ‘the covering of the head, or the clothing of the body’ would be an indispensible part of its format (1). It was, though, a promise the magazine struggled to made good on. Although those essays on dress, as well as attention to the costumes of other nations in travel writing and an antiquarian interest in dress in works of history, are recurrent features in the periodical from its inception, fashion journalism, as we would call it now, is conspicuously absent in the magazine in its first thirty years.