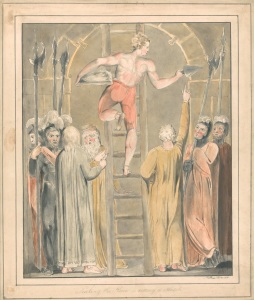 In an ‘Image of the Month’ in February, I wrote about Blake’s watercolour Mary Magdalen at the Sepulchre (c.1805). In this post, I’m jumping back a bit to another of Blake’s watercolour illustrations to the Bible, Sealing the Stone and Setting a Watch (c.1800-03), which depicts a moment slightly earlier in the biblical narrative, and was probably also produced several years earlier (the exact dates of these works are not known, but they have been assigned dates based on stylistic features).

The text illustrated is Matthew 27:66 which describes the sealing of Jesus’ tomb on the day after his death and burial. The chief priests and Pharisees had heard Jesus say that he would rise again on the third day, and they feared that the disciples would try to take away the body to fabricate a resurrection. They therefore asked Pilate to secure the tomb, so he sent a watch and instructed them make the tomb …read more