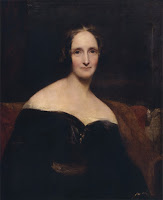 Happy Mary Shelley
Mary Shelley (1797-1851)
Mary Shelley was a pioneer of science fiction, writing Frankenstein (1818) while she was still a teenager. Shelley went on to write numerous novels, short stories, travelogues, letters, journals, and biographies in her lifetime, demonstrating extraordinary range. Her fiction explores the Gothic, the historical, the fantastic, and the futuristic, experimenting with narrative voice and frequently examining gender issues.
Where to start: Frankenstein; The Last Man; Mathilda
Mary Wollstonecraft (1759-1797)
An advocate of women’s rights, the philosopher Mary Wollstonecraft was Mary Shelley’s mother. In her A Vindication of the Rights of Woman (1792) she argued that women aren’t naturally inferior to men, stressing that their ‘appearance of weakness’ is caused by their lack of education and suggesting that women should ‘share the advantages of education and government with man’.
Where to start: A Vindication of the Rights of Woman; Mary: A Fiction; Letters Written in Sweden, Norway, and Denmark
Felicia Hemans (1793-1835)
Felicia Hemans was the most widely-read female poet in the English-speaking world during the nineteenth century. A writer of letters and prose as well as poetry, Hemans’s work is hugely patriotic, and frequently explores the position of women in the world.
Where to start: ‘The Image …read more