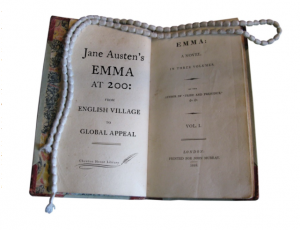 After four months, hundreds of (wo)man hours, lots of friendly support and chat on social media and some innuendo-laden conversations about pricking, pouncing and Mr Darcy, the ‘Emma at 200: from English Village to Global Appeal’ is a major new international exhibition to commemorate the 200th anniversary of the publication of Jane Austen’s brilliantly witty novel. It is the first major exhibition to be held at the Library since it opened in July 2003 and the result is frankly breathtaking. For the first time, a first edition of Austen’s novel is on display next to the first, rapidly published, French and American editions. Correspondence with Austen’s publisher John Murray is on display, alongside the work of many of Austen’s contemporaries. Early reactions to the novel are represented most spectacularly in the form of Charlotte Bronte’s wonderful (if not entirely complimentary) letter on reading Emma, which is on loan from the Huntington Library in California.

Never before have these items been gathered together in this way. Never again have they all found their way home to Chawton, to a house that Austen knew so well, in rooms in which she spent time. This is a one-off event. If you are within …read more