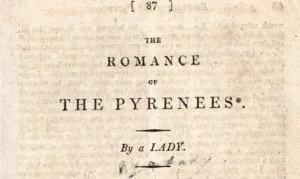 In the 1830s, in India, an anonymously published book entitled Santa Sebastino was sold at auction. It had two eager bidders who did not want to give up the purchase. One was Emily Eden, poet, novelist, bibliophile and sister of Lord Auckland. The other was historian, politician and equally avid reader Thomas Babington Macaulay. The episode is described with predictable bemusement by Macaulay’s nephew Sir George Trevelyan in his Life and Letters of Lord Macaulay (1875-76), who notes that the auction winner, Macaulay, later annotated the last page of his copy of Santa Sebastino (1806) with ‘an elaborate computation of the number of fainting-fits that occur’ in it. (Julia de Clifford alone faints 11 times, but who, except Macaulay, is counting?) [1]

While Trevelyan expressed admiration that Macaulay thought he could probably ‘rewrite “Sir Charles Grandison” from memory,’ his uncle’s passion for ‘silly, though readable’ books, like those of Mrs Meeke or Mrs Kitty Cuthbertson, who authored Santa Sebastino, as well as The Romance of the Pyrenees (1803), The Forest of Montalbano (1810), Adelaide; or, the Countercharm (1813), and (although Trevelyan did not know this) Rosabella; or, A Mother’s Marriage (1817), seemed inexplicable. Yet Trevelyan’s view is unrepresentative. Kitty or …read more